Blue Orchids, Do They Really Exist?

Are there really true blue orchids?

Like you, we’ve been dying to know the truth about it, too.

A lot has been written online about the existence of the rare blue orchids. Some say they don’t exist in nature, because like roses and many other flowers, orchids do not have the genetic component required to produce the blue pigment.

However, as many orchid lovers know by heart, orchid plants are simply a cut above the rest and a league of their own. With over 1,000 genera and more than 22,000 unique orchid species, the Orchidaceae family is unbelievably full of surprises.

We did our own research on this intriguing topic, and here’s what we discovered. (We’ve also included the sources and book references at the end of the article.)

When it comes to flowers and foliage, blue isn’t one of nature’s favorite colors.

“Less than 10 percent of the 280,000 species of flowering plants produce blue flowers,” says David Lee, author of Nature’s Palette: The Science of Plant Color and a retired professor in the Department of Biological Sciences at Florida International University in Miami.

According to Lee, there is no true blue pigment in plants. It’s even rare to naturally occur in leaves than in flowers and only a few understory tropical plants have true blue foliage.

For example, there are no true blue or black roses in nature because they lack the gene to secrete delphinidin, the anthocyanidin source of blue pigmentation in flowers. The occasional blue roses you see in the market are either product of tedious genetic modification, cross-pollination, or the resourceful use of dyes or floral paint.

If you love the color blue, true blue flowers to gush about include:

But that’s not all.

As we’ve mentioned, orchids, with an armada of insanely diverse species from all over the world, are a league of their own. That’s why it no longer surprised us when we learned that orchids are one of the elite few that can bloom in true blue.

In an effort to find the answer about true blue orchids, we’ve read a lot of blogs claiming of having true blue dendrobium orchids or blue phalaenopsis orchids, but somehow, they seem to be without merit.

The only surefire true blue orchid that we have confirmed based on our research is the exquisite Vanda coeruelea, aptly known as the blue orchid or the blue vanda.

Vanda orchids are one of the most sought-after genera. The exotic-sounding name was derived from the Sanskrit or Urdu name of a specific vanda orchid species, the Vanda tessellate, which has spread and has been used from then on to reference the entire genus.

Vandas are monopodial orchids, meaning they are single-footed, not rooted to the ground, and grow upwards. They have long strips of leaves on either side of the spike and have large, lovely flowers that come in a variety of colors, such as white, orange, pink, purple, burgundy, and blue.

This is the elusive Vanda coerulea. 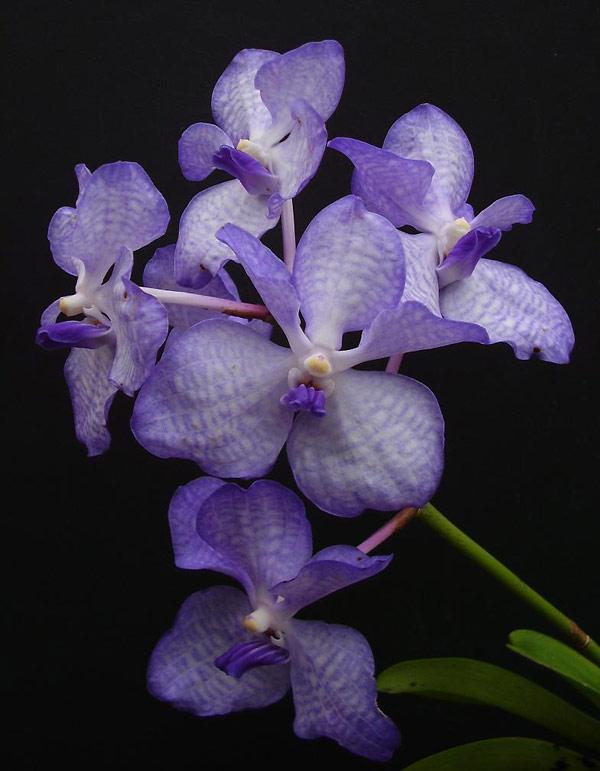 The History of the Blue Orchids

This breathtaking blue orchid was first spotted by Dr. William Griffith, a botanist and naturalist, in the Khasia Hills of Assam, a state in Northeast India, nestled south of the eastern Himalayas along the Brahmaputra and Barak River valleys, in 1837. Unfortunately, Dr. Griffith’s Vanda coerulea died when he brought it with him to England.

In the middle of the century, Sir Joseph Dalton Hooker, a British botanist and explorer, have written about his unforgettable encounter of the blue orchids in the very hills of Assam.

A snippet of it was published in the book, The Enchanted Orchid by, an Australian illustrator and orchid enthusiast, Max Fulcher:

“Near the village of Larnac, oak woods are passed in which Vanda coerulea grows in profusion, waving its panicles of azure blue in the wind. We collected seven men’s loads of this superb plant for the Royal Botanical Gardens at Kew, but owing to unavoidable accidents and difficulties, few specimens reached England alive.”

Based on the website of the Royal Botanical Gardens, the flowers of these blue orchids grow up to 13 centimeters across and are prominent for their small lip (labellum), barely two centimeters in length, an uncommon characteristic for vanda orchids, which can also be seen in an almost identical species, V. coerulescens.

In its natural habitat in the wild, it grows high above on deciduous, rough-barked trees, such as oak. Vanda coerulea have flower spikes that are sometimes split and produce up to 20 to 30 flowers per plant, which is undeniably much more compared to other orchid species in the vanda genus. 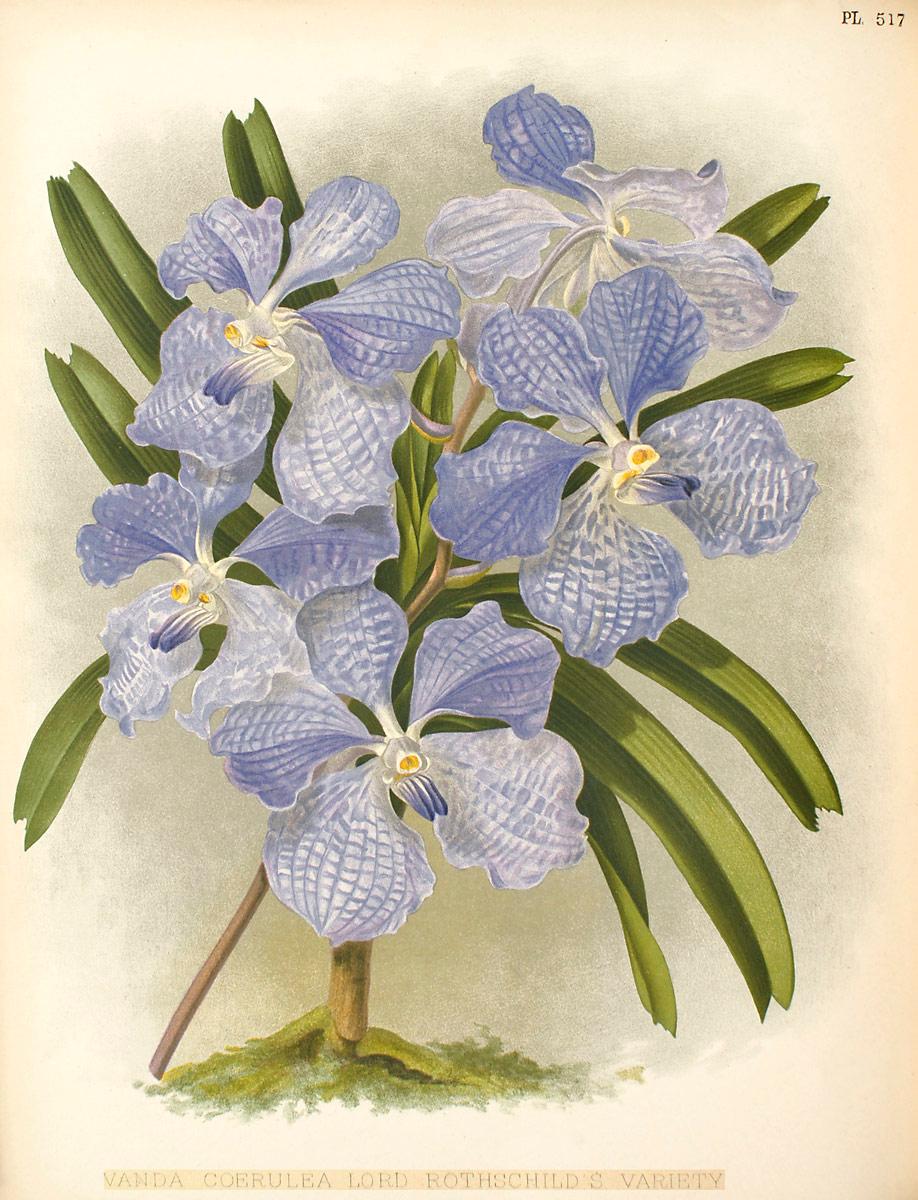 Where to Find Blue Orchids

Vanda coerulea is native in India (Assam, Arunachal Pradesh, Meghalaya, and Nagaland). However, numerous sightings have also been chronicled in neighboring Asian countries, including:

Previously, this vivid blue orchid was considered to be extremely rare in the wild until recently, on CITES Appendix I.

The rare blue Vanda coerulea orchid has long been sought and treated as a prized possession by many orchid aficionados. Over the years, many have discovered several V. coerulea species, including:

Vanda coeruelea, Lord Rothschild’s variety is another mesmerizing blue orchid from India and Burma. It was mentioned in the book Orchid Album: Comprising Coloured Figures and Descriptions of New, Rare and Beautiful Orchidaceous Plants, which was first published in 1884.

"This is without doubt the finest dark coloured variety of this, the Queen of the East Indian Orchids that we have of yet the good fortune to see; it was communicated to us by Mr. Hill, gardener to Lord Rothschild, Tring Park. The Sepals and petals are much broader than in the type, and of greater substance, the ground color being cobalt blue, distinctly and beautifully reticulated with deep ultramarine-blue: the lip is also of the same deep color."

Vanda coeruelea has been used extensively to cultivate more true blue orchids and to breed a stunning array of deep blue and purple orchid hybrids of vanda and other related genera. It’s a parent plant to various remarkable orchid hybrids, including the Vanda Rothschildiana, which is a cross with Vanda (Euanthe) sanderiana.

Aside from the sought-after bright blue-colored blooms, it tends to pass on its unique branched inflorescences and attractive net-like veins or tessellations on the sepals and petals.

How to Take Care of Vanda Coerulea

Vanda coerulea comes from cool, tropical mountain forests in Asia. In the wild, these true blue orchids bloom in the autumn season. That being said, it’s best to mimic that growing condition.

Other Types of Natural Blue Orchids

When you Google “blue orchids,” there were other results aside from the blue vanda. However, when we checked to see the photo, the orchids were either baby blue or purple.

Here are some worth noting from credible sources.

Currently, we are unable to expound on these types of blue orchids as there’s very limited literature about them. But one thing is for sure: they do not compare to the vividness of the blue vanda orchids.

Blue Phalaenopsis Orchids, Are They for Real? We’re sorry to burst your bubble. The blue phalaenopsis orchids you see in the market, although without a doubt, still beautiful, are not naturally blue.

In reality, phalaenopsis orchids bloom in a rainbow of stunning colors and hues -- including reddish purple, subtle to electric pinks, lemon yellow to yellow-orange -- except blue.

First-time buyers of the Blue Mystique orchids were dismayed when they found out that the new blooms of this deceiving blue orchid came out white.

how can get a blue orchid from Australia ?

As mentioned in the article, we didn’t include other varieties of blue orchids here that we couldn’t back up with sufficient literature or link backs to credible sources. But thank you for your suggestion! Perhaps the thelmytra blue orchids deserve its own post!

Thelymitra orchids here in Australia are blue. I don’t understand how so many orchid “experts” don’t even know that.